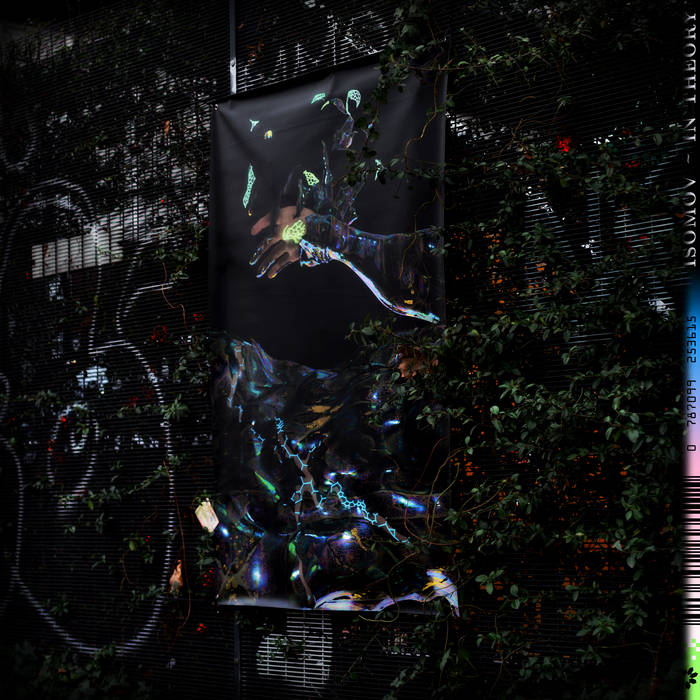 he rr ast i

DECISIONS is pleased to finally unleash ‘In Theory’ by NYC-based polymath Isomov, whose bio follows, in their own words:

“Isomov began as a project to explore the perspective of the ‘Automatic Computer’ from Asimov’s ‘The Last Question’ — the omniscient entity. At the time I was studying a lot of quantum information theory and was probably the most depressed I’ve ever been in my life; I dreamt of escaping my finite reality into the unending world of information. After graduating from University with a degree in mathematics, I’ve spent five years working as an art-world freelancer in Brooklyn. I work almost exclusively on the computer: rendering, arduinos, websites; I even tutor through webchat. On the one hand, my informatic intimacy has kept me largely alienated from physical reality, trapped in obtuse theory. On the other hand it has helped me to slowly reify as a non-binary cyborg goddess, a devout humanist obsessed with the practical affect of aesthetics.
For me, the internet has been a tool for gaining empathy through its ability to host and distribute diverse perspectives. The more my body has dissolved into the virtual, the more I have been able to resimulate the emotional experiences of others. I am now interested in how we move beyond a theory of utopia to the project of a protopia, always working to make tomorrow a little better. I’ve looked towards quantum information theory to help to understand and reconcile the seemingly infinite spectrum of realities we call our universe. This is the new vision of Isomov.”

‘In Theory’ sets divergent impulses in motion, animating superheated exchanges between order and entropy, flesh and code. ‘Origin, Emergence, and The One’ is a false utopia where differing cultures come together in restless harmony despite their aesthetic differences: frictious dancehall percussion and grandiose choral washes parry and twine, constantly threatening to subsume the other. ‘Hoping Mechanisms’ takes place at the critical point of identification, when the named object of perfection becomes a radical dystopia of conflicting binaries. Rarely have we heard kicks so exuberantly scattered or bass so charred — Uncanny Valley rendered as a scorched, inhospitable territory. ‘Ensemble’ shows the reality of a cyborg beyond binaries, the coexistence of a fictional ideology with the chaos of lived reality. A panicked voice is met with grounding sub bass, over which a superposition of arpeggiated chords glide. An emergent meter forms through an unseen grid before everything chaotically decoheres, revealing its ultimate fragility. ‘Wavelet’ is an attempt to describe the emergent and chaotic self through convolution and principal component decomposition. Identity is revealed via dizzying arrays of Moire patterns as rhythms slide over one another under liquefying bass pulses.
‘Memory Loops’ grapples with the inherent traumas present in any stochastic system, the vestigial remnants of code in everything’s DNA. We never escape reliving the consequences of these boundary conditions which define the historical trajectory of becoming.
‘In Theory’ conjures a hologram of emergence, an ecology of a self attempting to overcome each passing moment’s complexities in a bid for metastability. Oscillating fervently between the human and non-human, the EP offers riches for both cerebral listening and large soundsystem bodywork.

A limited edition physical release of ‘In Theory’ is available in the form of a WiFi-enabled interactive visualizer trapped in a small holographic sculpture. The sculpture is handcrafted and coded by Isomov, and can be purchased here:
isomov.bandcamp.com/merch/limited-edition-holographic-sculpture-wifi-enabled-visualiser

Vocal samples on "HOPiNG MECHANiSMS", "Ensemble", and "Memory Loops" provided by RAGS (Kathryn LeBlanc).
Special thanks to Dr. Martina Mrongovius for her help with the holograms.

Bandcamp Daily  your guide to the world of Bandcamp

Featuring interviews with the mighty Haitus Kaiyote and genre-busting L'Rain.